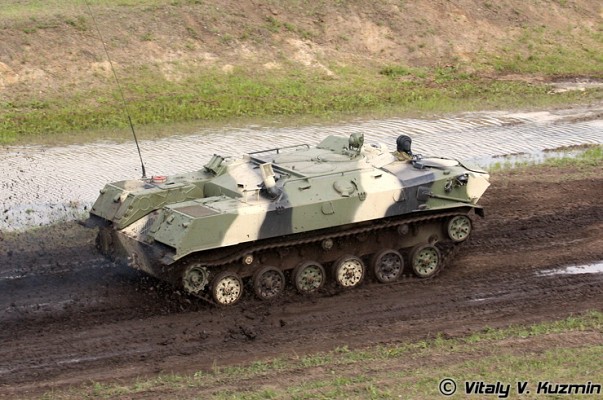 The BTR-D is a late Cold War era armored personnel carrier of Soviet origin. It was developed in the early 1970's to accompany the BMD-1 airborne combat vehicle. The BTR-D is based on the BMD-1 and can also be airdropped from transport aircraft.

The BTR-D was created by lengthening the BMD-1 chassis. The turret is absent to make room for a crew compartment that seats up to 10 soldiers in addition to the 3 men crew. The BTR-D served as the chassis for a wide range of specialist vehicles for airborne troops.

The BTR-D is armed with two 7.62mm PKT machine guns in the bow. These are operated by the passengers seated on either side of the driver. One or pintle mounted weapons are installed near the roof hatches. The 30mm AGS-17 automatic grenade launcher is commonly used on the BTR-D. Sometimes a 7.62mm PKB machine gun is fitted.

The aluminum armor protects the crew from small arms fire and shell splinters. Heavy machine gun rounds are likely to penetrate the armor. When operating the roof mounted weapons the crew is partially exposed. An NBC system is fitted, smoke grenade launchers are not.

The BTR-D has a very good mobility due to its limited weight. A 240 hp diesel engine provides propulsion. The limited weight results in a good power to weight ratio and limited ground pressure. The BTR-D is fully amphibious and is propelled in the water by two water jets. The BTR-D can be loaded onto a platform fitted with parachutes, allowing it to be air dropped from low flying transport aircraft.

The BTR-D was produced in quantity and was issued to Soviet VDV airborne units. The BTR-D is used alongside the BMD-1 and BMD-2 series of airborne infantry fighting vehicles. 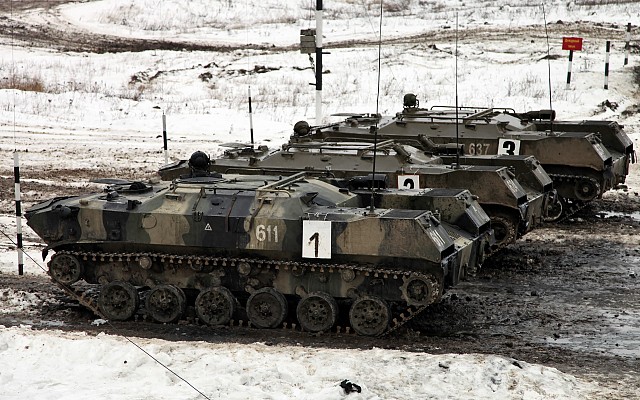 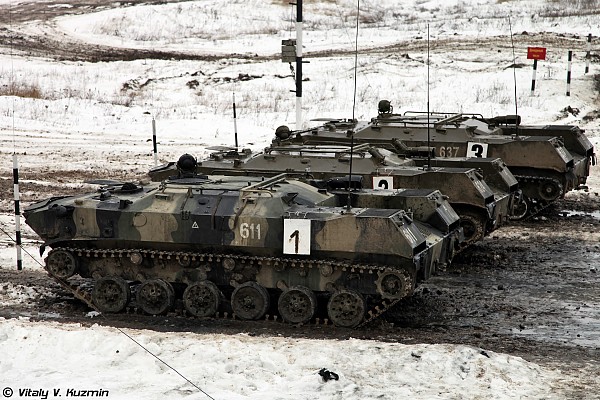 Several BTR-D armored personnel carriers lined up during an exercise in 2011. 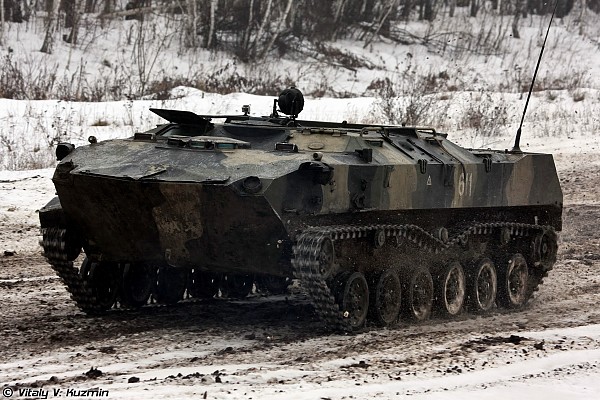 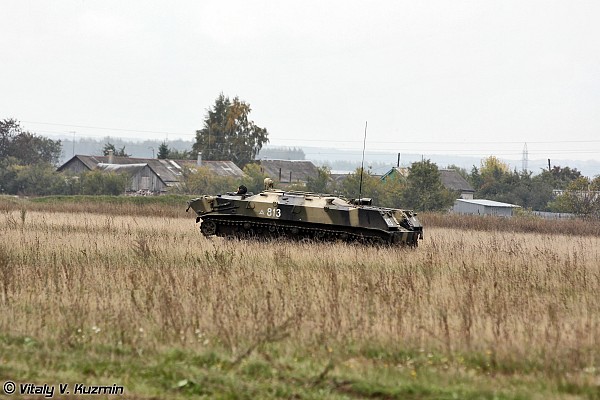 BTR-D armored personnel carrier for airborne troops in the field. 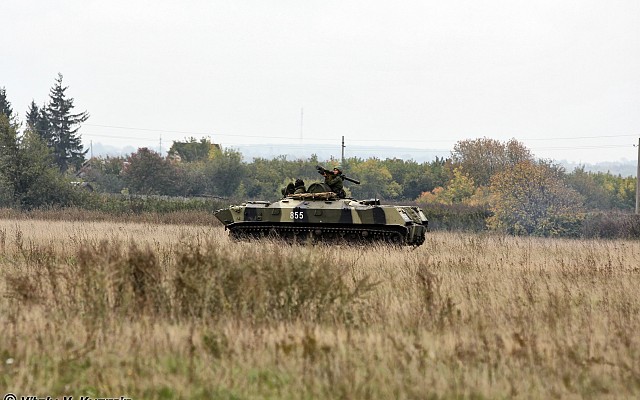 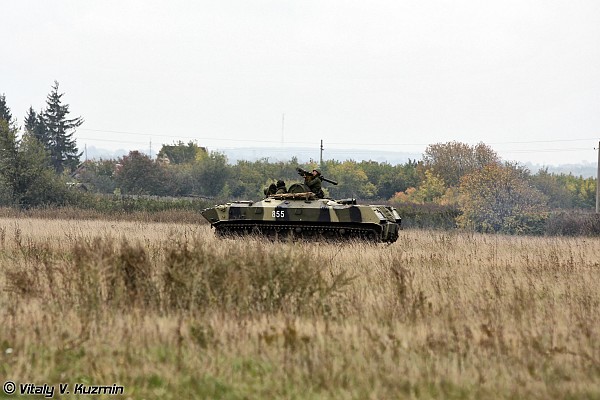 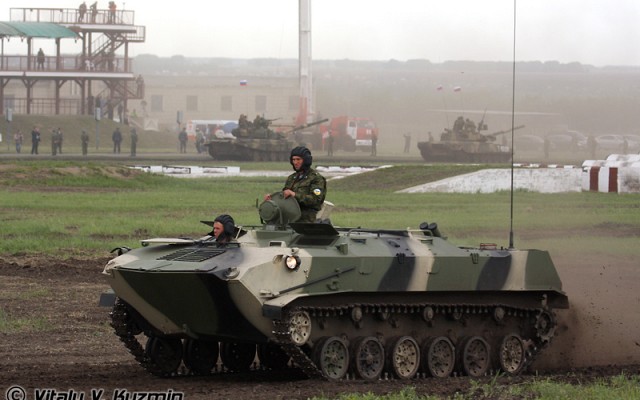 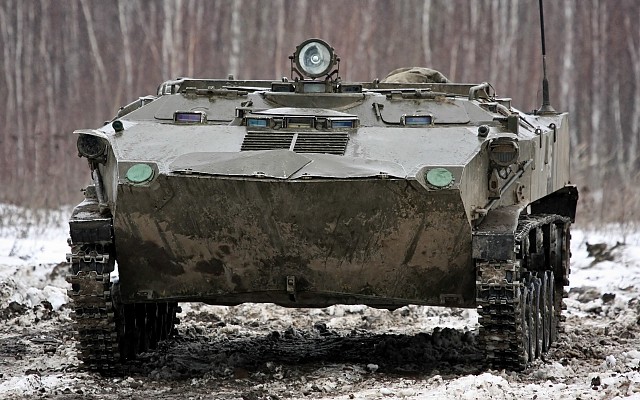 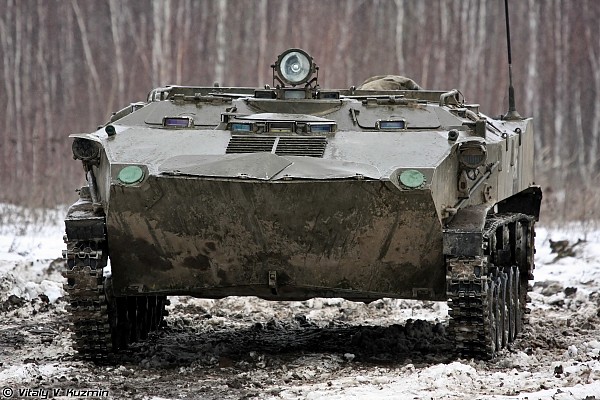 Vehicles based on BTR-D chassis 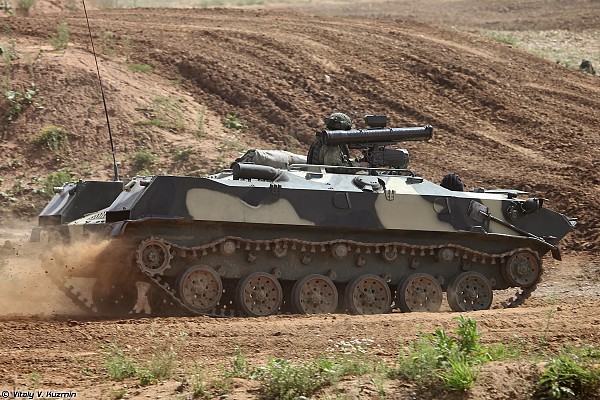 Tank destroyer based on the BTR-D. Fitted with two 9P135M launch post for the long range 9M113 Konkurs and medium range 9M111 Fagor series of anti-tank guided missiles. Racks for additional missiles are fitted in the crew compartment. The launchers can also be used away from the vehicle when fitted onto a tripod. Command post and staff vehicle based on the BTR-D chassis. Fitted with several types of radio and navigation equipment. An APU is fitted to power these systems when the engine is off. Commonly known as BMD-1KSh, although it is based on a BTR-D chassis instead of BMD-1. Self-propelled anti-aircraft gun created by mounting a twin barrel 23mm ZU-23-2 on top of a BTR-D. Also carries a team armed with man portable SAM system to augment the ZU-23.

Important note is that not every BTR-D with ZU-23 on top is a BTR-ZD. Various BTR-D have been modified to carry ZU-23 for use as fire support vehicle against ground targets. 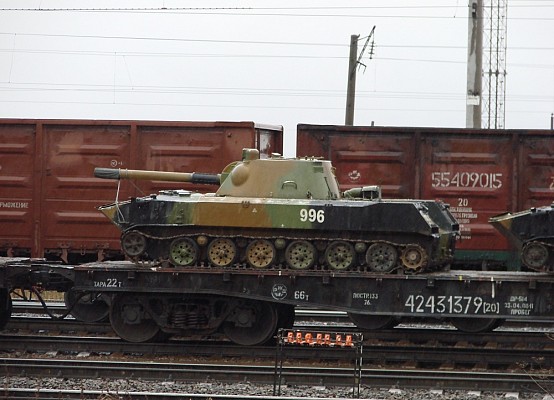 Self-propelled gun-mortar based on a modified BTR-D chassis. The 120mm breech loaded gun-mortar can be used in a direct fire role at short range. For use against vehicles a HEAT round is carried. The indirect fire range is 8.8 km with standard ammunition. Armored recovery vehicle based on the BTR-D. Fitted with a small jib crane, recovery winch and a wire range of tools and spare parts. The design of the BTR-D is based on the BMD-1. The chassis of the BTR-D was lengthened and it has an extra roadwheel. The AGS-17 automatic grenade launcher is commonly found as one of the pintle mounted weapons on the roof of the BTR-D. A tripod is often carried to allow for dismounted used as well.