The QLZ04 is an automatic grenade launcher of Chinese origin. It was developed in the early 2000's as an alternative to the older QLZ87 for use as a crew served or vehicle mounted weapon. The same ammunition as the QLZ87 is used but the belt fed design is better suited at providing support fire.

The QLZ04 is a gas operated weapon and its 'free bolt mechanism' might refer to the use of the blowback principle. The belt feeds from the left and the belt box can be attached to the weapon. The QLZ04 is tripod or pintle mounted and is fitted with spade grips. Normally an optical sight is used and crude backup iron sights are available in the carrying handle.

The QLZ04 fires 35mm Type 87 grenades from a 30 round belt. The cyclic rate of fire is 350 to 400 rpm and the theoretical maximum range is 1.75 km. Using an optical sight effective range is quoted as 800 m against point targets and 1.2 km against area targets. All types of 35mm grenades can be fired. A drawback is that switching ammunition types requires reloading and no dual purpose ammunition is available.

The QLZ04 is reportedly in Chinese service and has been exported in small quantities. It is likely to supplement or even replace the QLZ87 as a crew served or vehicle mounted weapon since it is much more capable in that role. 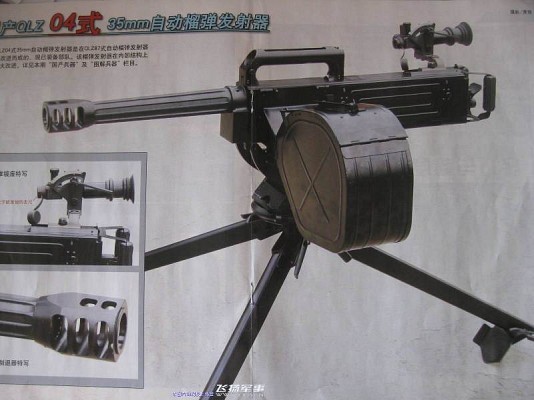 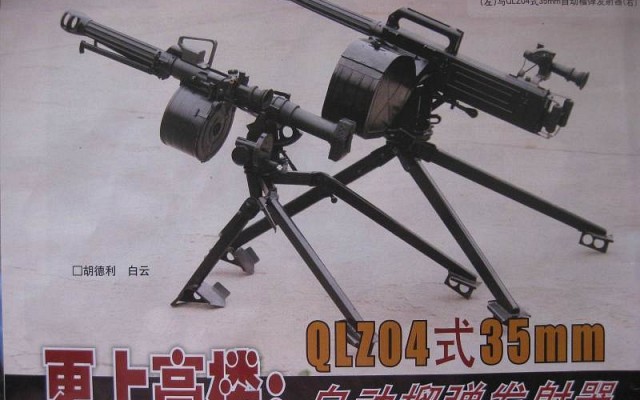 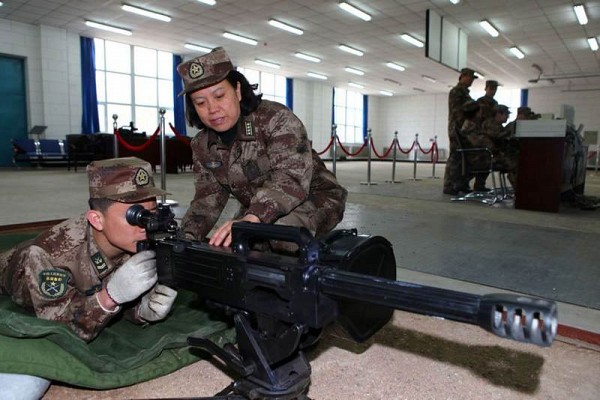 Right side view of QLZ-04 on tripod. The QLZ04 fires the 35x32mm range of high velocity grenades. The QLZ-04 was developed as a more capable support weapon than the older QLZ-87 and uses the same 35mm grenades.