The 9K33 Osa is a point defense SAM system of Soviet origin. It was developed in the late 1960's and is operational since the early 1970's. In the West the Osa is known by the NATO reporting name "SA-8 Gecko". The Osa replaced the 57mm S-60 towed anti-aircraft guns and is being supplemented by the new 9K330 Tor (SA-15 Gauntlet).

The Osa was the first self-propelled SAM system that incorporated both the missiles and the radar systems. Both the launcher and transloader are based on the large amphibious BAZ-5937 6x6 chassis. The launch vehicle is fitted with a rotating parabolic through search radar and a tracking radar with a small missile guidance radar on each side. On either side of the radar assembly three missile canisters can be fitted. Early vehicles carried only four missiles which were exposed to the elements.

The search radar has an acquisition range of 30 km against most targets. The tracking range is 20 km. The Osa may operate autonomously but is usually supplied with data longer range radars such as the 175 km range P-40 (Long Track) early warning radar or the 250 km range P-15 (Long Track) acquisition radar.

The Osa is able to launch two missiles with short internal at a single target. Targets can be engaged out to 10 km and at altitudes up to 5 km. The kill probability is quoted as being 0.35-0.85 for the original Osa and 0.55-0.85 for the later versions.

The BAZ-5937 chassis provides a good all terrain performance and good mobility on road. The Osa is powered by a 300 hp diesel engine. The maximum road speed is 60 km/h and 30 km/h on dirt roads. It has an amphibious capability with speeds up to 8 km/h.

The main user of the Osa was the Soviet military and it was widely exported to Warsaw pact nations and Soviet allies in the Middle East, Africa and Asia. Although the Osa is a dated design it is still a potent weapon system today. In Russian service it has been supplemented by the more capable Tor (SA-15 Gauntlet) which is also much more useful against cruise missiles and incoming missiles Original Osa system introduced in 1972. Comprises of 9A33 launch vehicle with four 9M33 missiles out in the open. NATO reporting name SA-8A Gecko. This was an operational system, but produced only in limited numbers. Radio command guided missile with proximity fuse. The original 9M33 had fixed wings and were carried on launch rails. The improved 9M33M2 and 9M33M3 are the most common variants. These are carried in ribbed transport/launch containers. The later 9T217B transloader is modified to accept the 9M33M2 and M3 missiles that are stored in ribbed canisters. The 9T217BM2 is used with the Osa-AK system and the 9T217BM3 with the Osa-AKM. Technical support vehicle based on the same type of amphibious chassis as the launch vehicle and transloader. This vehicles carries various tools to test, maintain, troubleshoot and repair components of the 9K33 system. Produced in five different updates, ranging from 9V210 to 9V210M3, which hardly differed from each other. 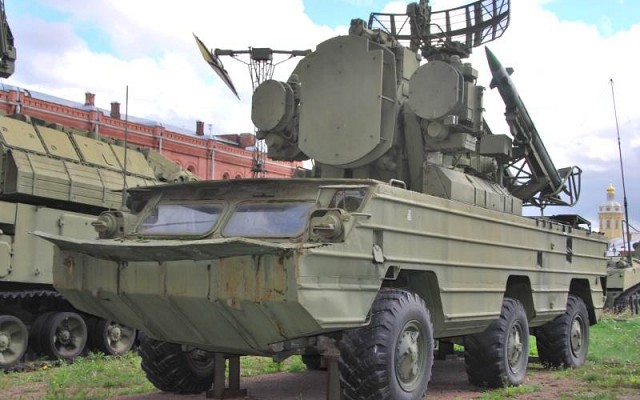 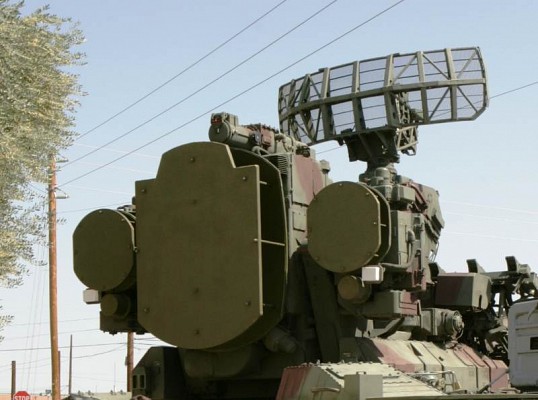 Close up of the Osa radar system which has the NATO reporting name Land Role. 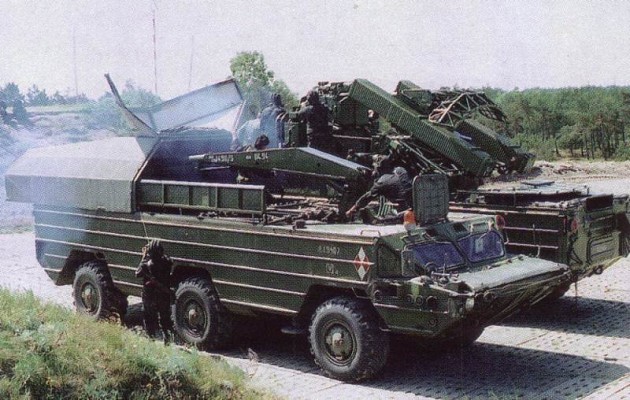 A 9T217B transloader preparing to reload a launch vehicle. Note the small crane and the tarpaulin cover moved towards the rear. 9T217B transloader with tarpaulin cover in the travel position. 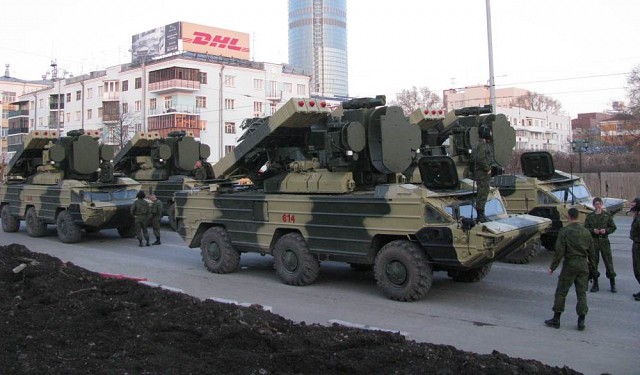 Belarussian 9K33M2 or M3 Osa system firing a missile during an exercise in 2009. The Osa-M is a naval SAM system based on the same 9M33 missile as used in the 9K33 Osa. The launcher is very different. It is a two arm launcher which is lowered into cover when the system is not in use.

The 9K33 Osa fires the 9M33 series of surface to air missiles. The 9K33 Osa was developed to replace the towed 57mm S-60 anti-aircraft gun with a more capable and more mobile system. The 9K330 Tor is the successor for the 9K33 Osa in providing mobile point-defense. It is a tracked vehicle with eight missiles ready for launch.