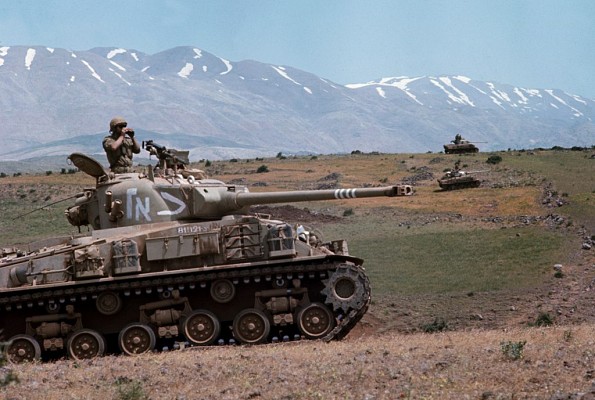 The Sherman M-50 is an early Cold War era main battle tank of Israeli origin. It was developed in the mid 1950's in cooperation with France. The goal was to up-gun and modernize Israeli 75mm Sherman tanks which were becoming obsolete. The design and initial production clandestinely took place in France, with most conversions carried out in Israel.

The Sherman M-50 is a modification of existing Sherman tanks with the short barrel 75mm gun. The turret mantlet is enlarged and fitted with the French high velocity 75mm SA 50 gun. A cast rear bustle is added to increase space within the turret. Early model Sherman M-50 were mostly based on the M4A4 model re-engined with the Continental R-975 and retaining the older style VVSS suspension. About two-third of the production is based on the M4A3 Sherman with a turbocharged Cummins engine, the improved HVSS suspension and wider tracks.

The high velocity 75mm SA 50 is the main goal of the Sherman M-50 conversion program. The French SA 50 cannon was inspired by the long barrel 75mm gun of the Panther tank and is also used on the AMX-13 light tank. On the Sherman M-50 it is manually loaded and has a maximum rate of fire of up to 10 rpm. The 1.000 m/s muzzle velocity and flatter trajectory make this cannon far superior to the short barrel 75mm M3 in the anti-armor role, especially at longer ranges. Additionally three .30 M1919A4 machine guns and a 12.7mm M2HB heavy machine gun are fitted.

The Sherman M-50 is based on the welded angular hull M4A4 Sherman. The turret and transmission housing are cast steel. While adequate during World War 2, the level of protection became somewhat lacking in the early Cold War era. However, the Sherman M-50 does provide a far higher protection level than the AMX-13 light tank. The large silhouette of the Sherman remains a drawback.

The Sherman is known as a reliable tank with a quite decent off road performance. The early model Sherman M-50 were re-engined with the Continental R-975 radial gasoline engine. This is one of the better Sherman engines, but with an increased weight mobility in desert conditions proved to be lacking. Later model Sherman M-50 were fitted with a 460 hp turbocharged diesel engine, HVSS suspension and wider tracks. These proved to have a much increased tactical mobility. Top speed is rather low at 42 km/h with the Cummins engine.

The main user of the Sherman M-50 was the Israel Defense Force. These were used during various conflicts. These include the 1956 Suez Crisis, 1967 Six Day war and in second-line service in the 1973 Yom Kippur war. The M-50 proved suitable against the T-34/85, but not the newer T-54, T-55 and T-62. About 75 were distributed to various Lebanese factions in the mid and late 1970's. Chile acquired 50 Sherman M-50 that were modified to Sherman M-60 standard with 60mm HVMS guns. 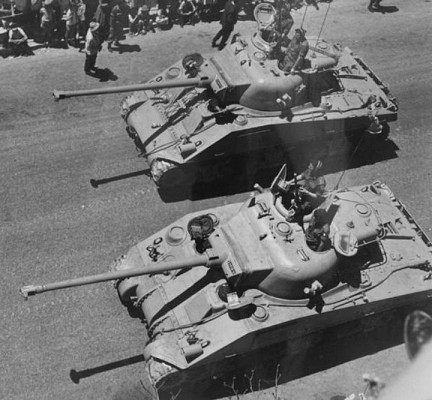 Initial production model, first produced in 1956 in France and later also in Israel. Most are based on M4A4 hulls refitted with the Continental R-975 radial engine of the M4 and M4A1 Sherman. These hulls are known in M4A4T (Transformé) in France. Reportedly some of the initial French batch of about 25 conversions included a hodgepodge of M4A1, M4 and composite hull M4 Sherman tanks. The early model Sherman M-50 is also referred to as M-50 Continental and M-50 Mark I in international sources. In Israeli service it was called Sherman M-50 Alef (Degem Alef = Model A). 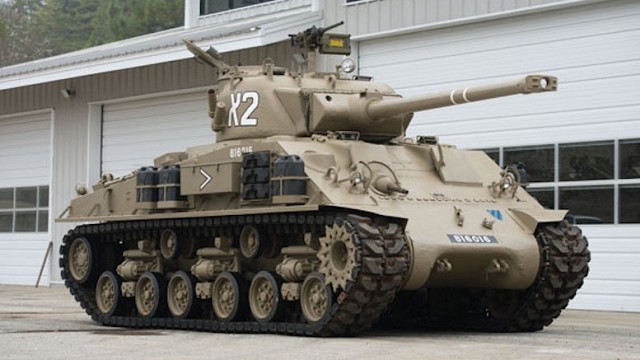 Improved production model of the Sherman M-50, first produced in 1960. Known internationally as the Sherman M-50 Cummins or Mark II. These are based on the M4A3 Sherman (large hatch) hull, are fitted with a more powerful US produced Cummins VT-8-460 turbocharged diesel engine and have the HVSS suspension and wider tracks. 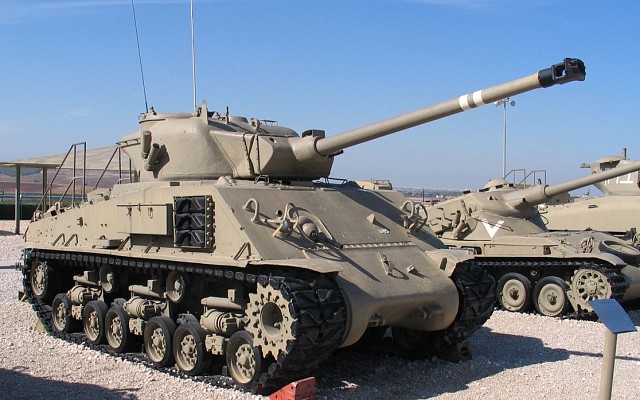 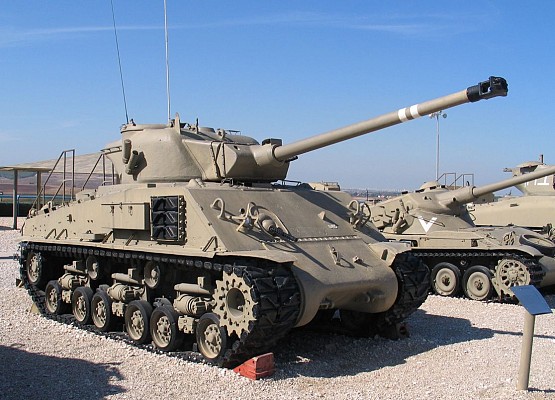 Sherman M-50 tank on display in a museum in Israel. 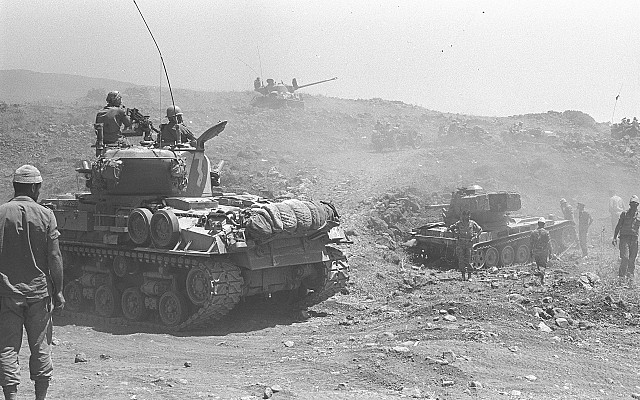 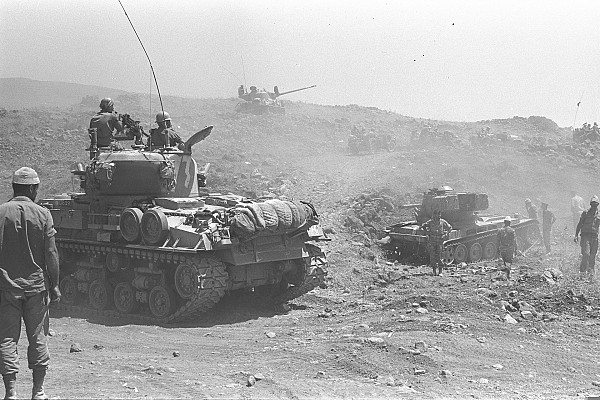 Rear view of a Sherman M-50 Bet in the Golan Heights. 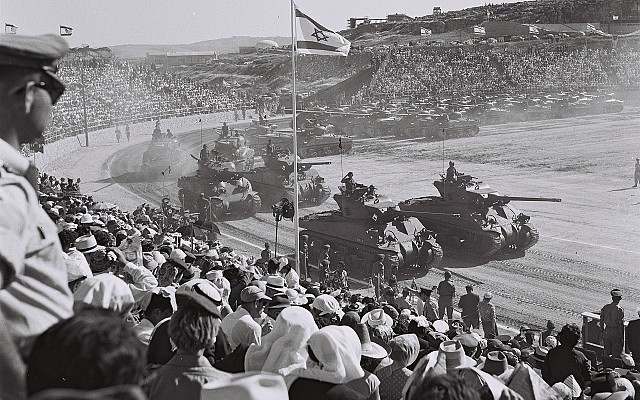 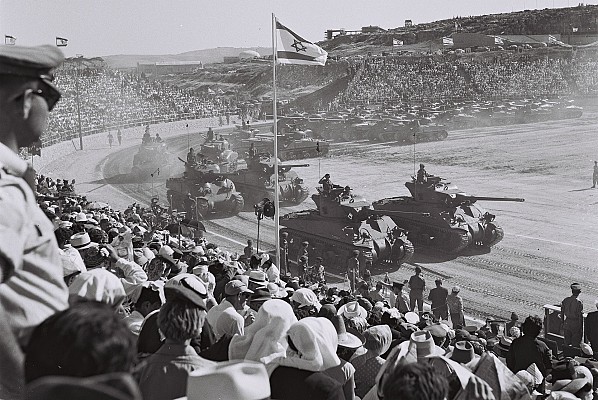 Unit of Sherman M-50 Alef tanks during the parade on independence day at the university stadium in Jerusalem in 1958. 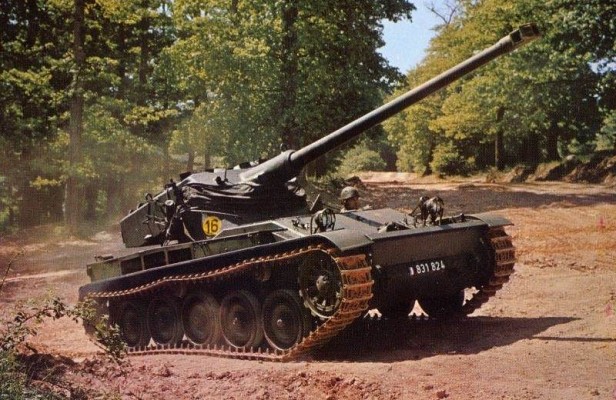 A single 12.7mm M2HB heavy machine gun is fitted on a pintle mount on the roof. This can be operated by either the loader or the commander.

Three .30 M1919A4 machine guns are fitted. One as a bow gun, one as a coaxial machine gun and one on a pintle mount on the roof. These were eventually converted to 7.62mm NATO during their service life.