The M3 is a World War 2 era sub machine gun of US origin. It was developed in the USA during World War 2 as a cheaper alternative for the Thompson sub machine gun. The nickname 'Grease Gun' comes from the resemblance to the mechanic's tool.

The M3 has a very simple design as it is a blowback operated weapon that fires from the open bolt position. The M3 has a fairly conventional design with the magazine inserted halfway the weapon acting as the forward grip as well. The buttstock is a retractable wire frame, making the M3 a very compact weapon.

The M3 fires the .45 from a 30 round magazine. The M3 is fully automatic only. The low 450 rpm rate of fire makes it very controllable and allows for short bursts. The maximum effective range is about 100 meters.

The M3 was adopted in December of 1942 and served with US front line forces until 1957. The M3 was issued as late as the early 1990's to US non combat personnel. Surplus M3's were exported to South America, Asia and Africa. 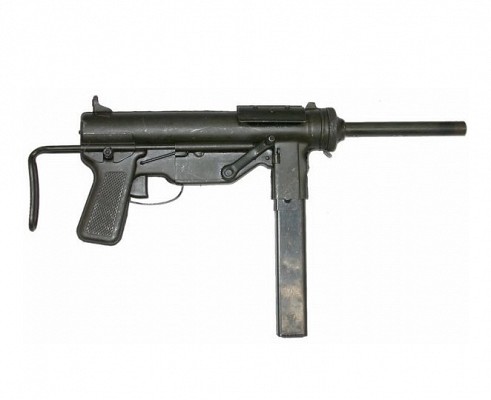 Variants of the M3 Grease Gun

The M3 Grease Gun is a simple sub machine gun optimized for mass production. It fires the .45 round at a low rate of fire.

The M3A1 is an improved model that is lighter and more reliable. Among the various small improvements the removal of the cocking crank is most obvious.

The M3 was also produced in 9x19mm using Sten magazines for US special operations forces in Europe in both a normal version and one with silencer.

In Argentina the 9mm model was produced as the PAM-1, which was later upgraded as the PAM-2 with a grip safety.

The FMBP-48 uses some design elements from the M3 Grease Gun.